My experience of Google foobar challenge

I got invited to Google foobar challenge on 25th March 2020, and worked on it and completed till Level 4 by 2nd May 2020. I wrote this blog( experience) month back but got busy with other work so couldn’t publish, so publishing it today.

Google has a secret way of hiring, Yess you read it right!!!

The Google Foo bar challenge is a secret process of hiring developers and programmers all over the world. Google uses this to hire some of the best developers around the globe which they think can be a good match for their organization. It is a secret process and the challenge consists of coding challenges of increasing difficulty as you go along. The Google foobar page is not accessible to everyone. Google sends an invitation and only those programmers get an opportunity to participate in the foo bar challenge.

Google Foobar is an invitation based hiring challenge. Means, you can only take the challenge if you have got the invitation from Google for Foobar. The unique thing about the Foobar challenge is that it finds you, and not the usual another way around.

So let me take you through my experience in the Google foobar challenge.

I was searching for python assert and the page loads…

suddenly the browser window splits open and I see this

“You’re speaking our language. Up for a challenge?”

And there was a link and I opened it and it redirected me to a new page ‘Foo.bar’

It’s kind of like a Linux console( UNIX command line like interface) where you get to solve the problems one by one upon opening a new problem directory. 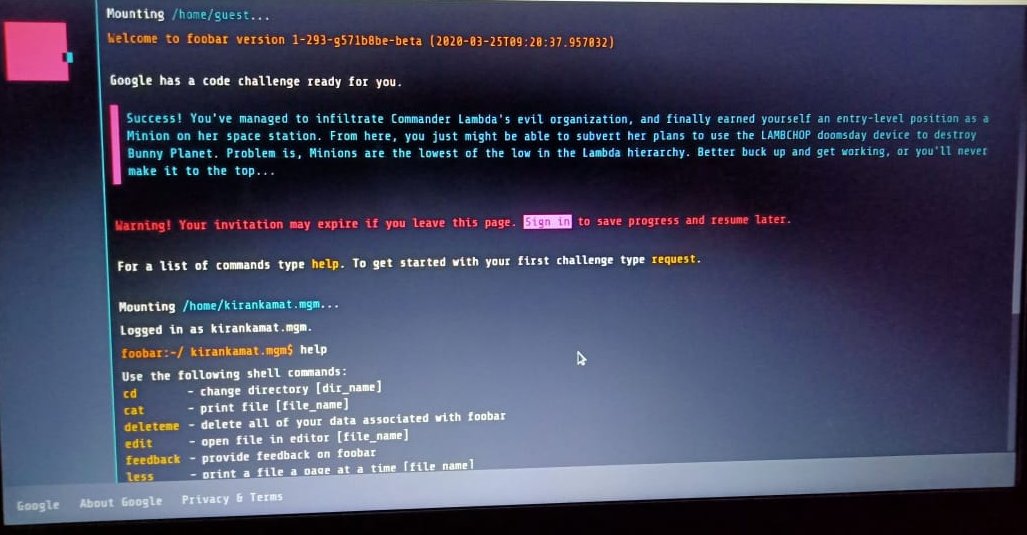 (I took this photo from my phone)

There is some text at the top of the screen:

“Google has a code challenge ready for you”

Just below, there is a paragraph of blueish text that sets the stage for a sci-fi adventure:

“Success! You’ve managed to infiltrate Commander Lambda’s evil organization, and finally earned yourself an entry-level position as a Minion on her space station. From here, you just might be able to subvert her plans to use the LAMBCHOP doomsday device to destroy Bunny Planet. Problem is, Minions are the lowest of the low in the Lambda hierarchy. Better buck up and get working, or you’ll never make it to the top…”

There was also note that if you leave the page it will expire, so I signed in.

There was a Readme file so open the readme file and that is how challenge began.

The challenge consists of 5 levels consisting of algorithm problems. I won’t share the problems, neither the solutions as it would be unfair.

But it was really great experience so far.

The first few levels were relatively easy, but as the levels peaked up, the difficulty gained heights. I have completed level 4 and I couldn’t complete level 5. The fourth level was quite intense! I was given weeks for each problem. The problems needed multiple concepts ranging from number theory to graphs. I somehow completed it.

Upon completing level 3, I had to submit my personal details in the console.

I completed till Level 4 which took me roughly one and a half months, but Level 5 problem was difficult and I could not crack the logic.

In foobar challenge time is not constraint till level 3 but if you are not working on the challenge every day then time can become constraint after level 3. The same happened to me. Since challenges in Level 1,2,3 were easy that I completed within a day, but I did not request a new problem(to go to the next level), until I was free which meant I did not take it seriously. But Level 4 was difficult, I was given weeks for each problem. I took weeks to complete the problem. Now I felt the difficultly in problem and need to work on problem for a few hours each day. The problems needed multiple concepts ranging from number theory to graphs. I somehow completed it.

Level 5 was more difficult than level 4. I was given weeks for that problem and forgot about the challenge, when I opened foobar I had only 2 days to complete and just lost in Level 5.

So if you get an opportunity to participate in the Google foo bar challenge, don’t look at the time given to you to solve the problem but just try to complete it and submit.

If you submit early, just enjoy the remaining time to learn and prepare for the next level.